Modify answers when they're merged into the document

When content from the Form (e.g. answers to questions) is merged into the document, you may want it to be in a particular format, such as Title Case or all lower case.  In addition to Form-Based Formatting, you can format merge fields directly in the template.  This second approach allows you to use a particular form for a particular instance of a merge field rather than the blanket approach which results from formatting inside the form.

How to use modifiers

Modifiers are implemented by prepending a special symbol to the comment text of a merge field.

For example, to use a name field modifier, type the desired modifier before the field label in a merge field (i.e., at the start of the comment) as shown below. All other modifiers are implemented in the same way (by starting the comment text with a particular modifier symbol). 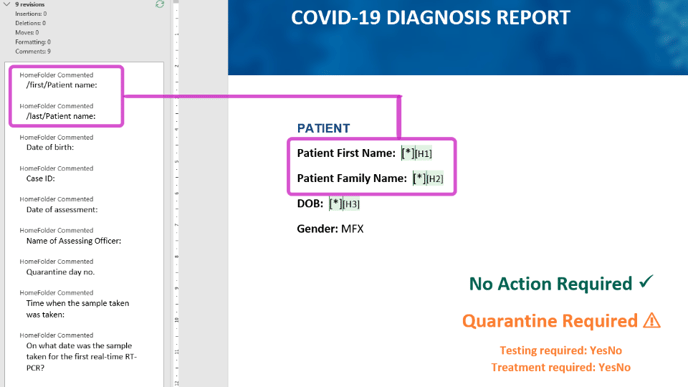 There are various modifications that you can make to content from any field type, which we have listed in the table below.

In addition to the standard merge field modifiers, name fields have two unique modifiers available for use in your templates. They are:

The name field modifiers automatically capitalise the first letter of the text that is merged into the document. Do not use other modifiers (such as * and ^) in the same comment.

By default, address fields will appear in a single (or continuous) line of text in the format:

However, it can be useful to split the address into several lines, for example, at the top of a letter.  This can be done using address field modifiers as per the table below.